Warning: A non-numeric value encountered in /home/customer/www/hollywoodresource.org/public_html/wp-content/plugins/social-media-buttons-toolbar/inc/php/enqueue.php on line 31
 This Engineer's Smartphone-Controlled Robots Will Be Sold In Apple Stores - HollywoodResource.org
L O A D I N G 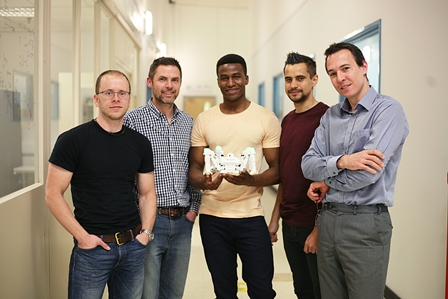 A British-Nigerian engineer used his tech company to create robots that can be controlled by smartphones:

“It has been four long years for British-Nigerian engineer Silas Adekunle.

His company, Reach Robotics, has worked tirelessly to develop  MekaMons, a line of agile robots that can be controlled by a user’s smartphone.

Smartphone-controlled robots may sound like all fun and games, but these robots are no child’s plaything: they can do battle with other MekaMons at a drop of the dime.

If that sounds dope to you, you’re in luck.

According to TechCrunch, Adekunle’s robots will be sold at Apple stores starting this week. Although a variety of robots are available, the entry-level device starts at $300.”